An Australian Bicycle Council report published this week has found that Australian states and territories invested $112.8 million in cycling-related infrastructure, education and promotion in 2013-14. 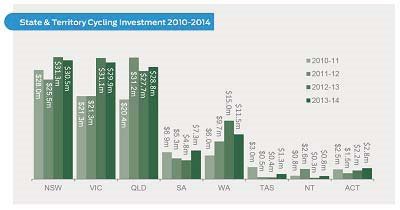 The report, National Cycling Strategy 2011-16: 2014 implementation report, showed the considerable progress made in 2014 on projects that redefine existing planning frameworks to enable the consideration of bicycles alongside other modes of transport. The safety of vulnerable road users was again targeted with the launch of several campaigns aiming to improve the interactions between people driving motor vehicles, riding bicycles and walking, and through parliamentary enquiries, citizens' juries and the National Road Safety Strategy.

The National Cycling Strategy 2011-16 was approved by Ministers in November 2010 with the aim of doubling the number of people cycling in Australia by 2016.

Read the report at this link.