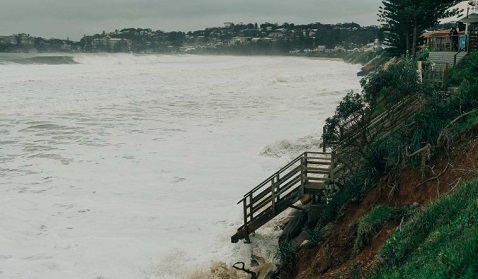 Climate inaction at the state and national level may end up costing local governments as much as $54 million annually, a new report has warned.

Some coastal councils are already paying more than $1 million to fix eroding beaches or protect beachside property or infrastructure, and the collective bill for remediation could top $54 million a year in coming decades.

Lesley Hughes, the lead author of the Climate Council report, says councils face continually increasing demands to maintain critical infrastructure, despite their tax revenues having shrunk to the fourth lowest share among the 30 industrialised nations that make up the Organisation for Economic Co-operation and Development (OECD).

“Effectively, councils are being asked to do more, with less,” Professor Hughes said.

“With state and federal assistance falling short of what’s required to help councils prepare for and respond to extreme weather, I can’t imagine how they will continue to protect and provide for their communities.”

Among the report’s key findings are that:

The report recommends, among other things, that local governments advocate for other tiers of government to embrace stronger climate policies, emissions reductions targets, and frameworks for mitigation and adaptation.

Ahead of the next federal election, the Australian Local Government Association is calling for the next Australian government to support communities in their climate change response by investing in a Local Government Climate Change Partnership Fund of $200 million per annum over four years.

ALGA is also seeking a targeted disaster mitigation program at the level of $200 million per annum for four years to strengthen community resilience response and reduce recovery costs.