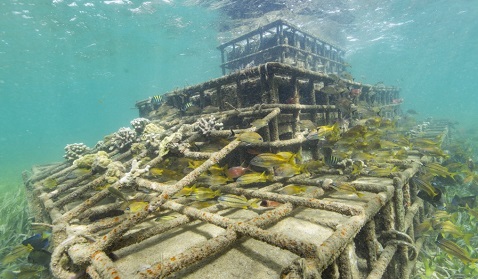 The City of Cockburn will install a fringing reef off a beach south of Fremantle in what it is describing as a unique coastal management trial.

Engineered reef modules totalling about 100 metres in length will be anchored 50m offshore at the northern end of C.Y. O’Connor Beach in early 2022 to break down wave energy reaching the shore and slow erosion rates.

City of Cockburn marine and coastal engineering officer Jonathan McKay said it would be the first full-scale trial of this type of engineered reef for erosion control in WA and was a first-aid measure for the beach.

“While engineered reefs have been trialled and implemented in other parts of the world with varying success, this would be one of, if not, the first modular engineered reef projects designed to achieve wave attenuation and erosion control in Australia,” Mr McKay said.

“Erosion has been a persistent issue at C.Y. O’Connor Beach for over 20 years with the foreshore and coastal assets at risk of damage and loss if no protection works are completed.

“Extensive works, such as the relocation of dual-use paths, dune revegetation and sand nourishment have been required in recent years to manage the erosion problem and while these do help mitigate the symptoms of coastal erosion, they do not fully address the issue.”

“The benefit of fringed reefs is that they have less impact on beach amenity because they are off-shore,” he said.

Mr McKay said the council would monitor the reef over the next few years to understand how it controlled erosion and affected the surrounding coastline, and the reef could be reconfigured, reduced or expanded over time.

The installation of the reef has been made possible by a $214,349 grant from the WA government’s coastal grants program to install the reef.

The council has also received $59,630 for a Geotextile Sand Container wall, which will be buried in the onshore dunes next to the reef as an erosion “backstop” measures to protect park assets in rare super-storm events.