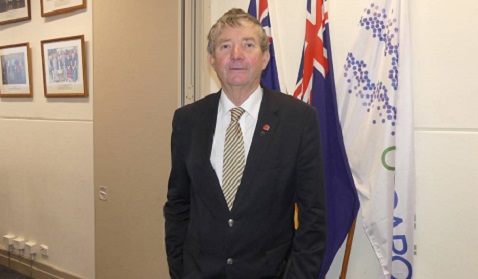 In the first of an occasional series on the elected leaders of Australia 537 councils, Kangaroo Island Council Mayor Micheal Pengilly answers questions about various aspects of his work and that of the council’s.

Councillor Pengilly was born and raised on Kangaroo Island, and he continues to farm a property with his wife on the island’s north, near Emu Bay.

He was chairman of the South Australian Country Fire Service board from 1995 to 2000 and served as chairman on the boards of the Hills Mallee and Southern Regional Health Service Board, the Kangaroo Island Hospital, and  the Pest Plant Control Board.

Cr Pengilly was first elected mayor of Kangaroo Island in 2003. In 2006, he won election to the South Australian State Parliament representing the Lower House electorate Finniss.

He left State Parliament in March 2018, and was re-elected as Kangaroo Island’s mayor in November 2018.

Q: What does your typical mayoral working day look like?

I am always on call, 24 hours a day. Because we are only a small council and a large island, I guess being Mayor takes me three to four days a week, going to functions, and getting out and about in the community.

Since the fires, I have been driving around a lot, calling in and seeing people and just trying to keep the place going.

Q: What is the best aspect of your job?

The best part of the job is talking and listening to people and constituents on the island. It is a varied community. It locks together when it has to, but it’s quite different with tourism, farming and a lot of retired people.

Q: What is the worst aspect of your job?

I don’t really have a “worst part of the job”. I just take it all in my stride.

Q: What is the most rewarding project you have worked on during your time in local government?

I think it was probably the amalgamation of the two local governments on the island in 1996 – which served the purpose of looking after the whole population and having one island voice rather than split voices.

Q: The Kangaroo Island local government area was one of the worst affected by the Black Summer bushfires. What are the lessons, looking ahead, for disaster preparedness and mitigation at the local level?

I think we have learned a lot as a council, and we have been encouraged by the support from a lot of other people and organisations.

The lessons for the federal and state governments are on mitigation measures through prescribed burns, particularly crown lands and national parks. If they don’t change that [opposition to prescribed burns], this will all happen again in nine or 10 years, quite frankly. That’s the seriousness of it.

I am quite confident that the Royal Commission into National Natural Disaster Arrangements will come up with some strong recommendations.

But we have been having recommendations into major fires for 20 years and governments go weak at the knees and don’t do things. This time they have to have to have the political guts to get in and actually make the changes to stop this. And the parliaments, if they impede them, should be found liable..

Q: The coronavirus pandemic has created serious financial headaches for councils. What can be done longer-term to ensure local government funding is adequate to provide the services residents, businesses and communities expect.

We as a small council can’t fund everything we’d like to do, so we look for major contributions from the state and the Commonwealth.

We have a strong primary industry base. We can produce food and fibre for the world long term. If we get rid of the plantation forestry we can produce even more.

Our fishing sector has gone down a long way through over-regulation.

Our tourism sector, the island’s biggest employer, is a key growth area. So,when we can get international visitors back, however long that takes, that will boost the sector.

There are all sorts of options, but we will need continued state and federal government support for some time … like a lot of remote areas that are difficult to crank up.

Our council this year has frozen rates because of the fires and Covid-19. We believed we didn’t so much have an income problem, we had an expenditure problem, so we’ve taken steps to deal with that.

Q: If someone considering standing for council were to ask you for advice, how would you respond?

I would advise them to use their two ears and not preach about what they know. It’s an old cliché, but the things that concern people are what’s happening outside their front door or farm gate. The right approach for elected local government officials is to listen carefully to the issues that people are having to deal with and then follow up.

Q: What is your favourite place, and why?

I like to walk the beach at Emu Bay, which is four kilometres of bright white sand. I’ll let the dogs go for a swim, and if it’s warm enough I’ll take a dip myself. It’s a great spot, very scenic and it has the solitude people need from time to time to reflect on where they’re at

Q: How would you reflect on the difference that you’ve made in your community and local government in general?

I believe that I’ve given a strong voice to the Kangaroo Island community. You don’t always please everybody but I’ve stood up on issues that I thought were important and I’ve listened to the people.