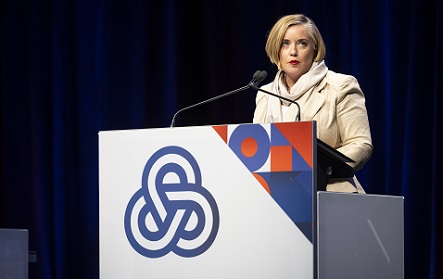 Local government leaders from around Australia gathered in Canberra from 20-22 June 2022 for the 28th National General Assembly of Local Government (NGA).

This event was held on the traditional lands of the Ngunnawal people, and the Assembly paid its respects to their elders past, present and emerging, and acknowledged the vital and ongoing contributions First Nations peoples continue to make to our nation.

Around 1,000 delegates welcomed and congratulated the Albanese Government on being elected and thanked the many federal members of parliament who attended and spoke at the NGA or associated events, including Minister King, Minister McBain, Minister Watt, Minister Burney, Minister Rowland, Leader of the National Party David Littleproud, and Zali Steggall OAM.

All reaffirmed the importance of local government, and councils look forward to seeing action through better partnerships.

Local governments asked for a Minister in Cabinet and we welcome the appointment of Cabinet Minister King supported by former Bega Valley Shire Mayor Minister McBain.

The Assembly welcomed the announcement from Minister King that she would work with Minister McBain to re-establish the Australian Council of Local Governments and was encouraged by the Government’s willingness to engage and partner with local councils.

The Assembly committed to progressing the next step of Closing the Gap and passed a motion supporting the Uluru Statement from the Heart.

The Assembly heard from leading economists that local government is the most productive level of government yet collects just 4 percent of national taxation revenue.

Further, they noted the essential federal funding support to local communities and called on the Government to review Financial Assistance Grants and restore them to at least 1 percent of Commonwealth taxation revenue.

Delegates and speakers recognised the protracted challenges of the COVID pandemic, unprecedented droughts, bushfires, and recent floods, and commended the work of local councils, local communities and government agencies on their work on emergency response and recovery.

A number of flood-affected leaders also met personally with the Prime Minister, and highlighted ways to better work together to prevent and prepare for natural disasters.

The Assembly warmly received Governor-General David Hurley and his comments on the vital role councils are playing in supporting disaster-impacted communities and will need to play in the future.

The Assembly noted however that more needs to be done on mitigation and the prevention of climate-induced natural disasters.

The Assembly discussed the global challenges to democracy and the critical importance of local government.

The Assembly reaffirmed its commitment to strong local leadership, transparency and public accountability, free and fair elections and local democracy.

After a stirring address from the Ukraine Ambassador, the Assembly passed a unanimous motion supporting the Ukraine people and their legitimate and democratically elected governments.

Other critical issues addressed at the Assembly included migration between cities and regions, housing affordability and the role councils can play in social housing in particular, critical workforce challenges and road safety.

Delegates agreed to continue to meet with their local federal members to highlight the importance of sustainable and transparent funding for local governments, and better partnerships that will help support progress in every community.

Convened by the Australian Local Government Association (ALGA) the NGA is the largest national gathering of democratically elected representatives in the nation.

ALGA is the national voice of local government and will review more than 106 policy initiatives adopted by resolution of the Assembly in the coming months.