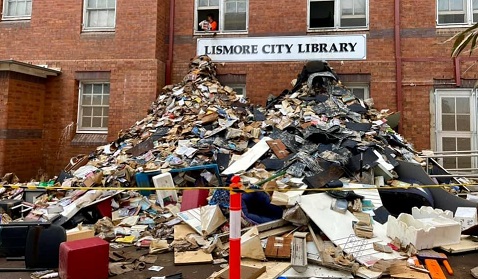 Disaster relief funding has been set aside to rebuild flood-impacted libraries and community facilities in NSW in a departure from historical practice.

However, an omnibus of support measures announced by the federal and NSW governments last week included $100 million for “the repair and reconstruction of community, arts and cultural infrastructure such as libraries, youth and senior citizens facilities, playing fields and courts, playgrounds and parks”.

The money will also cover amenities restoration and equipment replacement.

The Australian Local Government Association (ALGA) has long called for sporting, recreational or community facilities like libraries, halls, and showgrounds to be considered “essential public assets” for DRFA purposes.

ALGA and its state and territory association members maintain community and recreational facilities help to restore social and community networks – and their repair or reconstruction in the event of a natural disaster should be supported through the DRFA.

ALGA has also called for water and wastewater assets to be included in the definition of an “essential public asset and “public infrastructure”, along with stormwater infrastructure.

However, in another precedent-setting move welcomed by LGNSW, the state government last month said it was providing $145 million for the urgent repair and replacement of water and sewerage facilities in disaster-declared LGAs in the NSW Northern Rivers region.